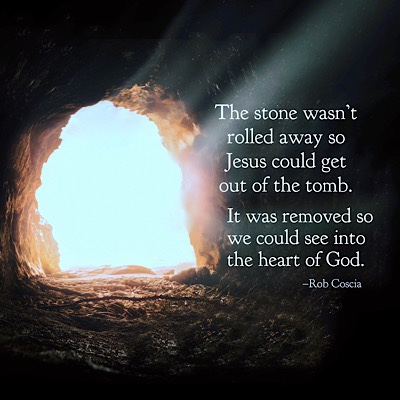 I’ve posted this for several years, edited a little more each time. Someday it may turn into a short story. I hope it’s a blessing to you, and that you have a truly wonderful Resurrection Day.

The ancient warrior quietly sheaths his sword, and turns to face the tomb at last. Eons beyond count he has defended creation and served its Creator, but the last few days have seemed an eternity by comparison. He has guarded Jesus from the moment he was in Mary’s womb. Every angel has grieved the separation from the Son, but none have felt it like him. But that doesn’t matter anymore. Every sorrow is about to be shattered. He wonders if the Roman guards with whom he has shared this plot of earth will ever understand the honor they’ve been given.

The bronze, powerful hands tremble slightly as he reverently places them against the stone. He turns his head to the East. As the first rays of the morning star pierce the thick darkness, he feels a warmth coursing through him. But it is not from the sun. He feels . . . life. He feels him. With all the hope in his being, he tilts his face heavenward. His voice, silent since the first hammer fall, almost uncontrollably booms out: “Now, Father?”

The answer rolls over him like a wave, filling him with a strength greater than anything he’s known: “NOW!”

All his love and grief and joy pour through his hands as he throws the massive stone aside, and a light greater than the dawn bursts from the tomb like an exploding star. The human guards recover just enough to see the source of the light, then faint into the arms of his warriors, who lay them carefully on the ground. They remain kneeling, joining him and the others already prostrate in awe.

He hears the surge of roaring praise building across the heavens, but enjoys this moment of worship without words. Basking in the radiant presence brings him a primal memory, and an unexpected revelation. As Jesus steps from the tomb, the angel smiles, and whispers, “Let there be light.”