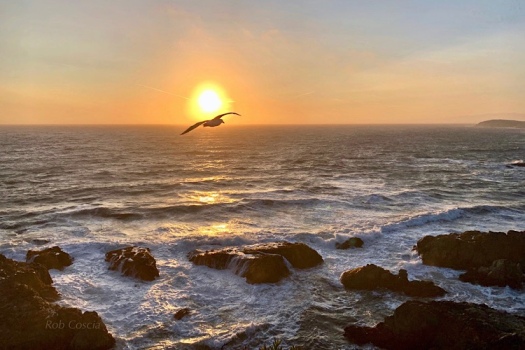 I love watching the gulls ride the thermal updrafts here. This one reminded me of a parable in the devotional classic, Streams in the Desert:

“There is a fable about the way the birds got their wings at the beginning. They were first made without wings. Then God made the wings and put them down before the wingless birds and said to them, ‘Come, take up these burdens and bear them.’

The birds had lovely plumage and sweet voices; they could sing, and their feathers gleamed in the sunshine, but they could not soar in the air. They hesitated at first when bidden to take up the burdens that lay at their feet, but soon they obeyed, and taking up the wings in their beaks, laid them on their shoulders to carry them.

For a little while the load seemed heavy and hard to bear, but presently, as they went on carrying the burdens, folding them over their hearts, the wings grew fast to their little bodies, and soon they discovered how to use them, and were lifted by them up into the air—the weights became wings.”

What you’re facing right now might be difficult and strange, but it also could be the very thing that’s equipping you to fly, and go further than ever before. Focus on what God has given you, not on what’s missing, what you might lose, or what you wish happened years ago. Recognize who he wants to be for you right now, and who you’re becoming in him.

Accelerate your growth in Jesus by increasing your thankfulness for every good thing in your life. Learn to fly by taking the opportunities to serve, heal, equip, encourage, and bless the people you meet. Speak life to them—and yourself—from inside the unlimited love and grace he’s given you, until burdens become blessings.